Riding Along with Brooklyn Bell

For Brooklyn Bell, or @badgal_brooky as she’s known on Instagram, being a bad gal is a lifestyle. “It means to be all that I am,” she tells me during a phone call, only a few days after her t-shirt line with 10 Barrel Brewing sold out. She goes on to say that “bad gals don’t hide themselves. They take up space.” Taking up space as a Black woman in 2020 can be easier said than done, but it can be even more difficult when you’re working in predominantly white and male-orientated fields, such as mountain biking, skiing, and climbing. Yet, if you take all of that and add it to Brooklyn’s other passion, graphic design, you’ve got one badass Western Washington University ’19 graduate who isn’t afraid to show everyone what she can do. 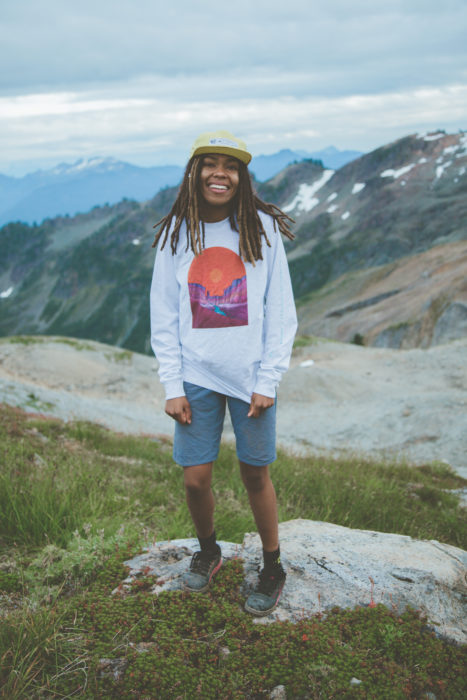 As a graphic designer and illustrator who specializes in artwork depicting the Great Outdoors while using vivid color palettes, Brooklyn’s biggest inspiration has always been the world right outside her door. “I’ve been a graphic designer since I was around 12 or 13. I knew that I was going to be one when I grew up, but I never thought to pursue fine art. Graphic design for me feels like putting puzzle pieces together. I didn’t know much about painting, so I thought ‘Well, how can I make something with these two separate ideas?’ I’ll draw things out, and I scan things in. I don’t even own a tablet. I still use a mouse,” she says, chuckling.

Another big influence for her art comes from what’s playing on her headphones at any given moment. From Fleetwood Mac to Cardi B’s “WAP”— another artist that Brooklyn respects because one of the biggest reasons why Cardi is such a massive success is because she is “staying true to herself in the best way possible”—, Brooklyn continues to explore different genres to discover how to put forth art that means just as much to her fans as it does to her. When I ask about her well-known love of 2018 Pulitzer Prize winner Kendrick Lamar’s music, Brooklyn respects how he “emotionally identifies with Blackness. When I listen to him, it drives me to create and to be bigger than I am.” I ask her to elaborate further. “I find that, for me, listening to music is like reading a book. How can I articulate the same emotions that I get from one activity to a landscape or an image? It’s kind of like flicking a light switch, you know? This song feels like it’s made for me. How can I make things for other people?” As a creative individual myself, I certainly understand what she’s speaking about. There’s a special moment where you put something out into the world, and it is met with such joy and such acclamation simply because people who look like you or who are going through the same complex emotions that you are have found it and are simply saying “This person knows me.”

Speaking of people enjoying her work, Brooklyn is still shocked at the idea of having fans. After amassing a little over 41K followers on Instagram, she should be used to the idea of walking into bars and having people shout out her name, a lá Cheers, but she isn’t as outgoing as she may appear online. “It’s so anxiety inducing,” she laughs, although “it does make me so glad that people feel comfortable enough to come up to me in person or emailed me because I shared a part of myself with them and they want to share a part of themselves with me.” “So, how do you like the fame?”, I go on to ask her, because in many circles, she is a name that is sure to be recognized. She pauses. “The fame part isn’t really that interesting. The money part, however, is really cool.”

The money part certainly is cool, but it can be hard to count on when you’re a freelancer even when there isn’t a global pandemic threatening your income. On the evening that we chatted, she mentioned that she had spent most of the day answering emails, phone calls and doing Zoom chats, so make no mistake: in some ways, some aspects of her job sound similar to a standard 9-5. But for Brooklyn, being a freelance graphic design and mountain biker is meant for her brain. After being diagnosed with ADHD (on one of her Instagram posts, she mentions how in high school, her planner was “my best friend) , having a job with so much flexibility and spontaneity works for her: “I love being active! I love being on my bike (a Kona Process 153 affectionally known as Ladybug). In fact, today, I went on a three-hour ride, and was able to do some work before and after I came back.” With all of the joys that come with making your own schedule, there can be some frustrating moments as well, typically when thinking about stability. When asked how coronavirus has impacted her workload, Brooklyn remarks that the biggest change was that she obviously “can’t travel anymore.” Now that the pandemic is easing up in certain parts of the country, she’s able to go meet up with friends again. In fact, she’s currently working on a project with a few of her bad gal biker pals: Michelle Parker and Hannah Bergmann. Parker is the creator of the Red Bull sponsored web series Originate, and the three of them have been riding around scouting a location to film their own episode, which will focus on the friendship between the three women and their love of biking. But that’s not all for Brooklyn: she’s also working on some new shoots for Mountain Bike Gear and possibly doing a film focusing on the female empowerment within Kona Supremes (a riding and racing team based out of the Kona Bike Shop in Bellingham, WA that focuses on getting more women into cycling), which Brooklyn was an ambassador of. As Brooklyn says, “All of us went onto to do some really cool things.” 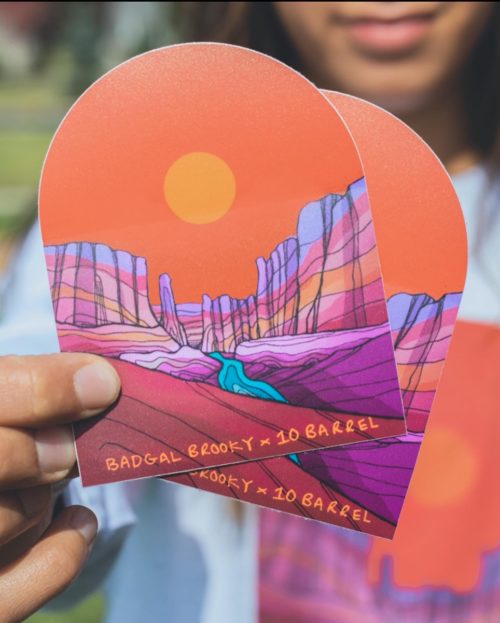 Of course, I had to ask her about her collaboration with 10 Barrel, where a portion of each proceeds from each shirt will go to Outdoor Alliance. As an Ambassador of the drinkware company Hydro Flask, whom 10 Barrel has worked with on previous accounts, she was excited when the popular brewery asked if she wanted to work with them. The avid Pub Beer drinker hadn’t worked with too many breweries before, but she chose this particular brewery based on the work that they’ve done with other campaigns and releases. It certainly doesn’t hurt that their motto is to “Drink Beer Outside”. As I mentioned at the beginning of this interview, Brooklyn’s t-shirt line with 10 Barrel sold out within a matter of days, some sizes within a matter of hours. When I asked her how it felt to be the fastest selling collation with this brewery, she seemed so shocked, even though people have been wanting this from her for years! “When I posted about the line, people commented “Wait, you have a shirt?! I need this!” There’s a restock coming sometime this week, but that is sure to sell out just as fast, so if you’re planning to grab one for any upcoming holidays, get ready to throw someone out of way (I kid, I kid).

Before we ended our call, I was interested to know if the recent Black Lives Matter marches rallying against police brutality and our upcoming presidential election were influencing her. She begins by stating that “Well, I’ve been a Black person my whole life, but yeah, I would say that this uprising has certainly changed my life.” After we both chuckle because, really, no truer statement has been uttered, she begins to reflect. “I’ve gone mountain biking in places where I see a Blue Lives Matter sign or a MAGA hat, and I have encountered people who have no idea or can’t even begin to imagine what it’s like to walk in my shoes. People will throw out such broad generalizations, not realizing how harmful they can be.” Brooklyn has certainly found ways to combat that negative energy though: “I have been trying to get people to vote and care more about climate change by using Instagram. It takes less energy for me to get people to care about these issues, so I don’t feel like I’m grinding myself into dust.”

With a little less than four weeks before the election, tempers are certainly more heightened than ever. If you find yourself becoming exhausted after battling with people in the comments of whatever social media feed, take a page from Brooklyn Bell’s book: grab your headphones, crank up your music as high as you can, and pedal off into the sunset. You deserve it. 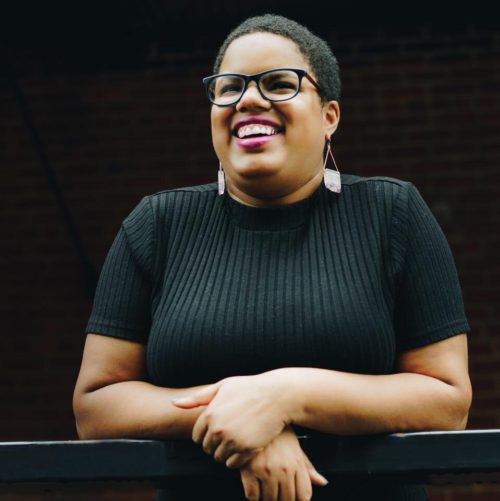 Katherine D. Morgan is the assistant features editor for The Rumpus and a current employee at 10 Barrel Brewing. She is the author of the debut chapbook No Self-Respecting Woman. Her essay about the presidential election of Donald Trump is featured in the anthology Fury: Women’s Lived Experience During the Trump Era. Katherine’s work has appeared or is forthcoming at Huffington Post, The Rumpus, Portland Mercury, HelloGiggles, Ravishly, jmww journal, Willamette Week, Real Simple, Trampset, and The Establishment. Her work has been nominated for the Best of Net award. She lives in Portland, Oregon, where you can find her snuggling with her cat Ramona, and crying during the series finale of Frasier.